Nutrient News For Women Over 50 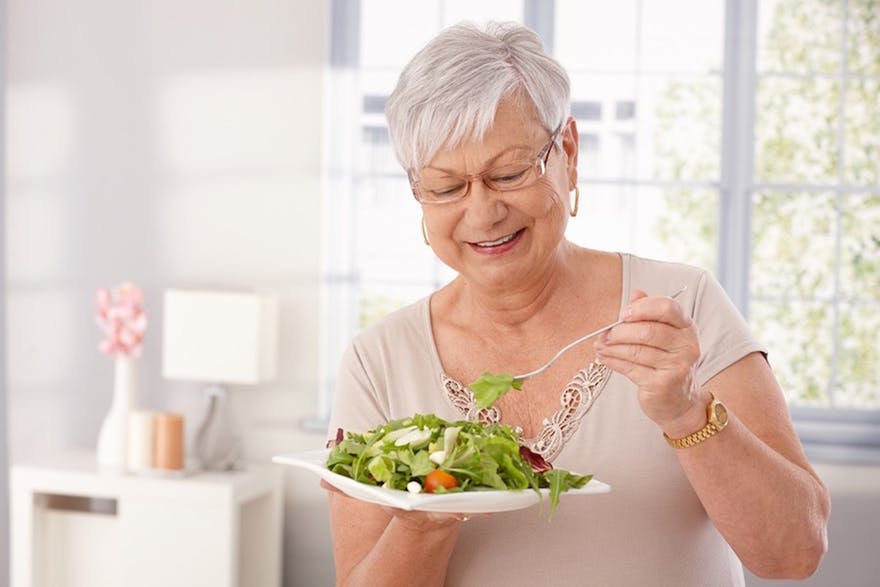 You need fewer calories as you get older. While the decline may seem like it happened overnight, it’s been in the works for decades, in part because of gradual muscle tissue loss. Muscle burns more calories than fat, so less physical activity further reduces your calorie needs. And if you don’t decrease calorie intake, it’s easier after age 50 to pack on the pounds if you’re sedentary.

While calorie requirements decrease, suggested intakes for certain vitamins and minerals also change. Here’s what women need to know about getting the nutrients they need from food, multivitamins and other dietary supplements when necessary, to feel their best.

Menopause means a loss of estrogen, a hormone that assists the body’s absorption of calcium from foods and dietary supplements, and helps to keep calcium in your bones to boost their strength.

To help slow the rate of bone loss that can lead to osteoporosis, experts suggest increasing daily calcium intake from 1,000 milligrams a day to 1,200 milligrams after age 50 – about the equivalent of four eight-ounce glasses of milk or other dairy foods. Many women don’t consume the calcium they need before age 50, and they may not meet the increased need after 50, either.

Vitamin B6 may not get much attention, but it’s important for heart health, energy production, and to support the nervous system. Vitamin B6 needs to increase after age 50, and some studies suggest that older people may need more than the current recommended levels of vitamin B6. Animal foods, such as meat, are among the richest sources of vitamin B6, and many breakfast cereals contain added vitamin B6. If you avoid vitamin B6-rich foods, or eat small portions of them, you may not be getting enough of this important nutrient.

Iron is part of red blood cells that deliver oxygen to every part of the body. Bleeding causes iron loss, and many women in their childbearing years experience iron deficiency. However, iron deficiency is uncommon among postmenopausal women, largely because monthly iron losses have ceased.

Suggested iron intakes drop by more than half after menopause, which, in many women, starts around age 51. Iron is found in foods such as meat, poultry, fish and fortified grains. After menopause, avoid taking dietary supplements with iron to prevent iron overload, a condition that can harm the heart and liver.

You don’t need more, or less, vitamin D after age 50, but this nutrient is worth talking about because many people do not get the required amount at any age. Vitamin D is necessary to absorb calcium from food and dietary supplements and prevent bone loss, and it also may play a role in heart health.

This nutrient is present naturally in high amounts in relatively few foods, including swordfish, salmon, and tuna. Fortified foods, such as orange juice and milk, are excellent vitamin D sources. However, it would take about six eight-ounce glasses of vitamin-D-added milk or juice to meet your daily needs. Many women need to supplement their eating plans with vitamin D supplements to help meet the recommended intake.

Vitamin B12 is necessary for producing red blood cells, making DNA, and digesting properly, among other important functions. Age does not alter vitamin B12 needs, but it does determine the type of vitamin B12 you should consume.

In older people, synthetic vitamin B12, the form found in fortified foods such as breakfast cereal and dietary supplements, is preferred to the naturally-occurring kind. That’s because an estimated 10 to 30% of people over age 50 are unable to absorb the vitamin B12 found naturally only in animal foods such as meat, milk, and poultry. Even small shortfalls of vitamin B12 over time can lead to health problems.