Diet for a healthy pregnancy 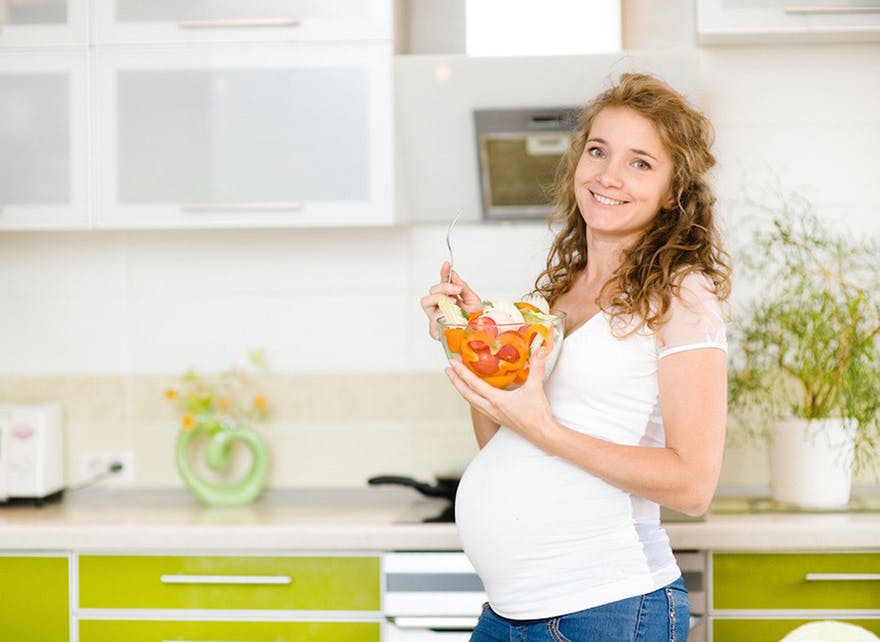 Now that you're a mum-to-be, it is important to eat well. This will make sure you get all the nutrients you and your developing baby need.

If you know you haven't been eating as well as you could, it is even more important to start having nutritious, well-balanced meals. Your daily meals should include a variety of foods from the four main food groups shown in the Food Standards Agency's eatwell plate:

Dairy products, along with sea fish and sea salt are all good sources of iodine (NHS 2011). You need plenty of iodine in your diet to help your baby's development (Vanderpump 2011).

Do I need to eat more now I’m pregnant?

Your body becomes more efficient when you're pregnant, and makes even better use of the energy you get from your food. This means you don’t actually need any extra calories for the first six months of pregnancy. Then you only need about 200 extra calories per day for the last three months. Two hundred calories is equivalent to:

Your appetite is your best guide of how much food you need to eat. You may find your appetite fluctuates throughout your pregnancy:

The best rule to remember is to eat when you are hungry. Have a good balance of foods every day and you will gain weight steadily as your baby grows.

Should I take any vitamin supplements?

In an ideal world, free of morning sickness or food aversions, a balanced diet would be all you'd ever need. But an antenatal vitamin-mineral supplement may be good insurance to make sure you’re getting the right nutrients.

It's recommended that you take two important supplements during your pregnancy:

Later on in your pregnancy you may need to take an iron supplement (NICE 2008). Your iron levels will be checked during your pregnancy, and your doctor or midwife will advise you about your needs. Calcium is also important while you’re pregnant, as you'll now need twice as much each day.

You could take a special pregnancy multivitamin that contains folic acid, vitamin D, iron and calcium. Look for one that also contains vitamin C, vitamin D, B vitamins such as B6 and B12, potassium, zinc, iodine and vitamin E.

Don't take any supplements which contain retinol, the animal form of vitamin A. In large quantities, this can be toxic to unborn babies (EVM 2003). However, the plant-based carotene type of vitamin A is safe in pregnancy (EVM 2003). Also don’t take megadoses of vitamins and minerals, as this could be harmful to your baby.

Talk to your doctor or midwife about special supplements you might need if you:


Are there any foods I shouldn’t eat during pregnancy?

There are some foods that you’ll have to steer clear of during pregnancy, because they could be unsafe for your baby:

Starchy foods, such as potatoes and bread, are an important part of your diet, but try not to over-cook or over-bake them. When starchy food is fried, baked, roasted or grilled at high temperatures a natural chemical, called acrylamide, forms.

Some research has suggested that eating a lot of acrylamide-rich food in pregnancy may be associated with low birth weight (FSA 2012, Pedersen 2012). Experts say more research is needed to be sure. But it's easy to reduce levels of acrylamide in your diet, so you may think it's worth doing anyway:

Store potatoes somewhere dark, cool and dry, but not in the fridge. Putting them in the fridge can increase the amount of sugar they hold, which could lead to higher levels of acrylamide when you bake, roast or fry them (NHS 2011).

Dieting during pregnancy could harm you and your developing baby. Some diets can leave you low on iron, folic acid, and other important vitamins and minerals. Remember, weight gain is one of the most positive signs that you’re having a healthy pregnancy.

So if you're eating fresh, wholesome foods and gaining weight, just relax. You're supposed to be getting bigger!

If you are overweight, you can improve your diet by cutting out foods high in fat and sugar and taking some exercise. However, see your doctor first for advice before changing how much you eat or doing more exercise.

What's a healthy way to put on weight?

It's best to gain weight gradually. You'll probably gain between 10kg and 12.5kg during your pregnancy (DH 2009).

Bear in mind that weight gain varies among women, and how much weight you put on during your pregnancy depends on many factors. So concentrate on eating a healthy diet of plenty of starchy carbohydrates, fruits and vegetables, protein, and milk and dairy foods, and just a little in the way of fats and sugars.

When you put on weight may be as important as the amount you put on. You may gain the least weight during the first trimester. Your weight should then steadily increase throughout the second trimester, and you may put on the most weight over the third trimester, when your baby is growing the most.

How many meals should I eat?

Even if you're not hungry, chances are your baby is, so try to eat regularly. Aim for three meals and two to three healthy snacks in between. And if morning (or all-day) sickness, food aversions, heartburn, or indigestion make eating a chore, eat less, more often. You may find that eating five or six small meals is easier on your body.

Eating high-fibre and wholegrain foods will help to keep you feeling full, and will be more nutritious, too.

Can I still have occasional treats?

You don't have to give up all your favourite foods just because you're pregnant. But foods and snacks high in fat, salt and sugar shouldn't be the main part of your diet, either.

So as far as snacks are concerned, try a banana rather than a packet of crisps or tinned fruit in juice rather than ice cream. But don't feel guilty if you fancy the occasional biscuit. Enjoy every bite!